Vitamin K helps to make various proteins that are needed for blood clotting and the building of bones.

It comes in two forms. The main type is called phylloquinone or K1, found in green leafy vegetables like collard greens, kale, and spinach.

The other type, menaquinones or K2, are found in some animal foods and fermented foods.

Vitamin K is linked to reduced heart disease risk such as heart failure. This may be because it could help reduce vascular calcification.

Vascular calcifications are mineral deposits on the walls of the arteries and veins.

These mineral deposits sometimes stick to fatty deposits, or plaques, that are already built up on the walls of a blood vessel. Vascular calcifications are common but could be serious.

However, whether vitamin K intake could affect heart structure and function is still unknown.

In the current study, researchers aimed to examine the association of vitamin K status and intake with heart function and structure.

Left ventricular (LV) mass is the weight of the left ventricle, typically estimated using echocardiography, and is thought to represent the cumulative effect of blood pressure on the heart.

It is closely related to body size, greater in men than in women, and increases with age.

No association was found in men. Vitamin K status was not associated with other heart structures or function indices.

These findings showed a high vitamin K status being linked to decreased left ventricular mass only in women, while intakes of vitamin K were not associated with any cardiac structure or function measures.

The researchers say that these results extend previous findings on the role of vitamin K status to decrease heart failure risk.

The research is published in Nutrition Journal and was conducted by Joline W J Beulens et al.

Saturated fats, dairy foods and heart health: What to know 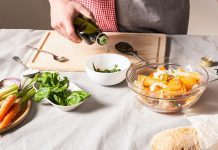