The diet could reduce energy intake and increase post-meal metabolism, which was associated with reductions in blood fat and increased insulin sensitivity.

The findings suggest a low-fat plant-based diet is an effective tool for reducing body weight and improving insulin sensitivity and post-meal metabolism.

Excess body weight and insulin resistance lead to type 2 diabetes and other major health problems. There is an urgent need for dietary interventions to prevent and treat these conditions.

Previous research found that eating a plant-based diet improves the health of the gut so people are better able to absorb the nutrients from the food that support the immune system and reduce inflammation.

In the current study, researchers aimed to examine the effects of a low-fat vegan diet on body weight, insulin resistance, post-meal metabolism, and body fat levels in overweight people.

They conducted a 16-week diet intervention and tested 244 people. These participants were asked to follow a low-fat vegan diet or a control diet.

Before and after the diet intervention, the team examined these people’s body weight, body composition, visceral fat, and insulin resistance.

The researchers found over the 16 weeks, body weight decreased in the low-fat vegan group by 5.9 kg. The thermic effect of food increased in the intervention group and did not change in the control group.

The thermic effect of food is a reference to the increase in metabolic rate (the rate at which your body burns calories) that occurs after ingestion of food.

The team also found in the low-fat vegan diet group insulin resistance and blood fat decreased. None of these factors changed strongly in the control group over the 16 weeks.

Based on the findings, the team concluded that a low-fat vegan diet could reduce body weight by reducing energy intake and increasing post-meal metabolism.

The changes are linked to reductions in blood fat and increased insulin sensitivity.

The research is published in JAMA Network Open and was conducted by Hana Kahleova et al. 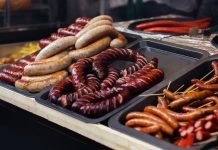