Alzheimer’s disease is a progressive neurologic disorder that causes the brain to shrink (atrophy) and brain cells to die.

It is the most common cause of dementia — a continuous decline in thinking, behavioral and social skills that affect a person’s ability to function independently.

However, experimental evidence in older people without dementia is inconsistent. This may be due to the low sensitivity of tests for detecting subtle improvements in cognition in healthy people.

In the current study, researchers examined the effect of omega-3 supplementation on learning and memory formation.

Before and after the intervention, the team tested the participants’ memory performance.

One limitation of the study is that the intervention period is short. Future work needs to see if long-term omega-3 supplementation provides similar benefits to memory function.

The research is published in the Journal of Alzheimer’s Disease and was conducted by Nadine Külzow et al. 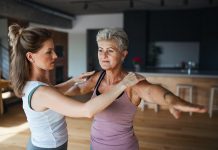 A healthy lifestyle may slow down memory decline